Worldly Life and the Hereafter | Part 1 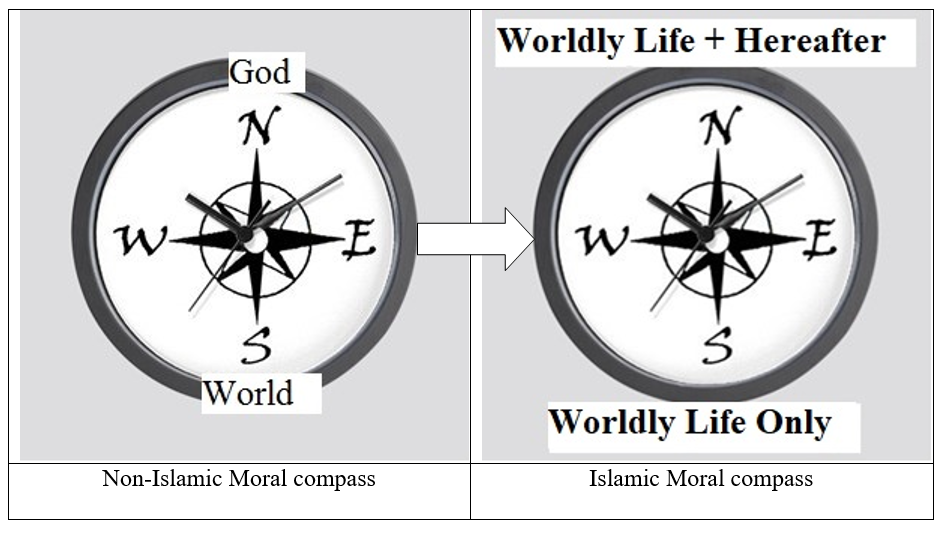 Atheists believe that there is no God and no life after death.

By contrast, all Abrahamic religions believe in doomsday, which is the end of the worldly life, and in Judgment Day when the dead will be resurrected from their graves to be held accountable for their deeds in the worldly life.  Because the Abrahamic faiths believe in a fair and just God, accordingly they believe that He will not let the bad people be equal to the good people.  Rather, they believe that humans have two different phases to their lives: the first one is the worldly life on earth, and the other phase is the Hereafter —in Heaven or in Hell fire, based on their deeds in the first life.

This idea could fit Christianity, especially in some Catholic and Orthodox dimensions, where the monks and nuns renounce worldly pursuits to devote themselves fully to spiritual work, living in monasteries to stay away from the secular world, in accord with what Jesus said:

“My kingdom is not of this world. If it were, my servants would fight to prevent my arrest by the Jewish leaders.”   (Gospel of John 18:33-38)

Therefore, they claim, Jesus separated the worldly life from the heavenly life. In addition, he said:

The Christian European societies accepted secularism as a remedy to release the Church’s control over the state; this was because the idea of secularism (the separation between the state and the church) fits Christianity in separating worldly life from the hereafter.

Some Islamic schools of thoughts, such as some Sufis and asceticists, developed a similar idea, with the result of dividing people into three levels. The first level is atheists who deny the Hereafter. The second level is the regular believers who seek the good in both lives. The third level is the best believers who seek the Hereafter only, and do not care about the worldly life.

Figure 2. Three Levels of Believers in the Purist View

In the modern era, this idea became very dangerous, because the terrorist’s groups used it to recruit and mobilize young Muslims to serve their goals and plans. In the beginning, they isolated themselves from their families and societies, and then turned against them.

This idea is strange in Islam. Yes, belief in Judgment Day is one of the six Pillars of Faith in Islam, but there is no monasticism or monkhood in Islam. Islam values the worldly life and enjoins preparing for its future until the end of the last minute, as Prophet Muhammad (ﷺ) said,

“If the Day of Judgment comes while you are planting a new tree, carry on and plant it.”  (Musnad Ahmad 12491 – Grade: Sahih (authentic) according to Al-Haythami, authenticated by Al-Albânî):

Protecting life is one of the five objectives of Islamic law (Shari’ah), and the Quran considers saving one person’s life as saving humankind entirely.

Enjoying Worldly Life is not a Sin

After Adam and Eve ate from the forbidden tree, God introduced worldly life on earth to them as the enjoyment they preferred.

But Satan caused them to slip out of it and removed them from that [condition] in which they had been. And We said, “Go down, [all of you], as enemies to one another, and you will have upon the earth a place of settlement and an enjoyment for a time.” [Sûrah Al-Baqarah, 2:36]

So enjoying worldly life is not a sin. It does not necessarily take you away from God. Actually, it is in keeping with the tradition of Prophet Muhammad (ﷺ), whose example we follow.

A group of three men came to the houses of the wives of the Prophet asking how the Prophet worshipped [God], and when they were informed about that, they considered their worship insufficient and said, “Where are we in relation to the Prophet as his past and future sins have been forgiven.” Then one of them said, “I will offer the prayer throughout the night forever.” The other said, “I will fast throughout the year and will not break my fast.” The third said, “I will keep away from the women and will not marry forever.” God’s Messenger came to them and said, “Are you the same people who said so-and-so? By God, I am more submissive to God and more afraid of Him than you; yet I fast and break my fast, I do sleep and I also marry women. So he who does not follow my tradition in religion, is not from me (not one of my followers).  (Saḥîḥ Al-Bukhârî 5063)

In fact, God has forbidden us to forget enjoying the worldly life.

He has produced the pleasures of a worldly life for us. He encourages us to enjoy them, and He has forbidden us to disallow others from enjoying these pleasures.

O children of Adam, wear your adornment at every mosque, and eat and drink [with enjoyment], but be not excessive. Indeed, He likes not those who commit excess.

Say, “Who has forbidden the adornment of God which He has produced for His servants and the good [lawful] things of provision?” Say, “They are for those who believe during the worldly life [but] exclusively for them on the Day of Resurrection.” Thus do We detail the verses for a people who know.

Say, “My Lord has forbidden only immoralities —what is apparent of them and what is concealed—and sin, and oppression without right, and that you associate with God that for which He has not sent down authority, and that you say about Allah that which you do not know.” [Sûrah Al-A’râf, 7:31-33]

Ayman Refaat hails from Alexandria, Egypt and now resides in the United States of America, where he teaches as Adjunct Instructor of Arabic Language at the University of Missouri-Kansas City. He also serves as Islamic Spiritual Guide at the U.S. Penitentiary in Leavenworth. Mr. Refaat holds several university degrees: Bachelors (1994) in Arabic Language and Literature, as well as in Oriental Language and Literature, from the University of Alexandria; Masters (2015) in Curriculum and Instruction, from the University of Missouri-Kansas City. Among his publications in Arabic are several articles regarding Arabic and Hebrew Literature; also two books on Arabic grammar and rhetoric. English language publications include a set of three primary level books for learning Arabic starting with the alphabet. Forthcoming works: Liberate Islam: A Modern Rational View of Islam in its Original Sources; The Bell Curve of Civilizations - with focus on Islamic Civilization; The Purpose of Life in Islamic Spirituality. Also, he has given presentations on the theme of his book, The Bell Curve of Civilizations, at several churches in his area. Mr. Refaat is available for small group talks on Islamic subjects and may be contacted at [email protected]

Prohibitions Regarding Food, Drink, and Clothing

The Moral Aspect of Islam | Part 3

The Moral Aspect of Islam | Part 2

The Moral Aspect of Islam | Part 1

The Social Aspect of Islam | Part 5