Hoarding is a process of stocking goods in a warehouse or shop for selling them when the price has gone up due to scarcity. Sometimes this stocking up is done for the welfare of the family and community, but this humanitarian motive happens very rarely in modern society.

On the outbreak of COVID-19 (Novel Corona Virus), some greedy and opportunist shopkeepers and business persons are hoarding goods with the intention of later getting a higher price due to a short supply. When the price is raised on existing goods due to a belief that there will soon be a limited supply, this is called ‘price-gouging.’  Police have caught many people hoarding sanitiser and masks in various states. The price of masks and hand sanitiser has skyrocketed in various local markets in the USA and the rest of the world. The author has spoken to some of his friends in the UK, USA, Germany, Spain, and various neighbouring countries. He has found that the price of medical health care products, especially protective items, has gone up. Hand sanitiser worth 50 cents to 1$ is sold at $25 privately in the USA. 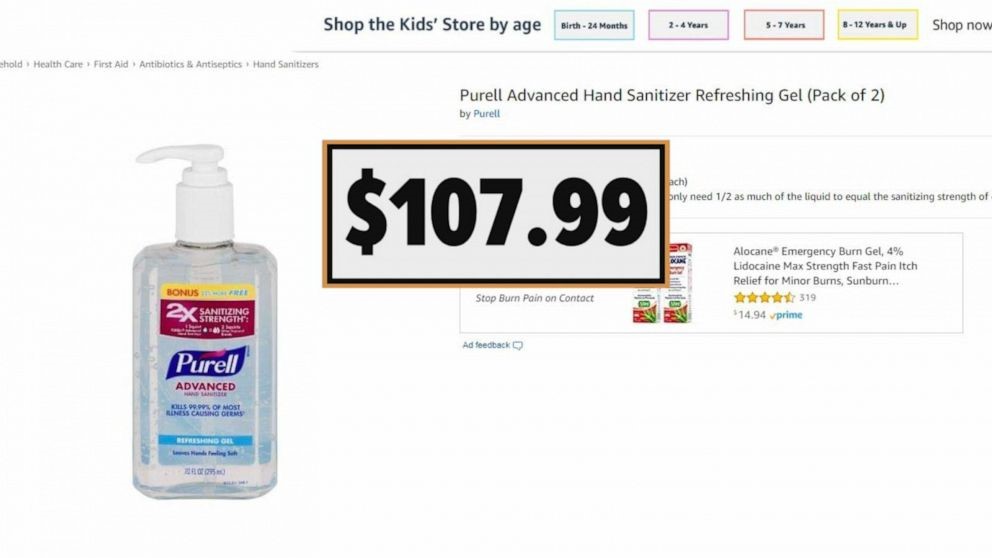 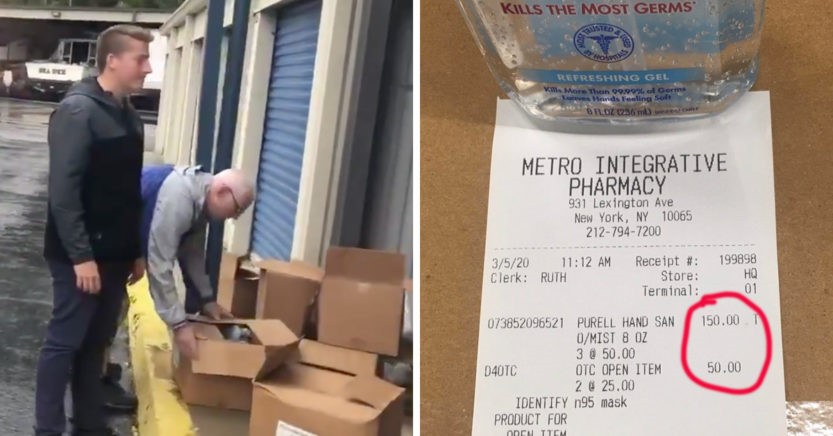 Similarly, the N95 masks used by medical practitioners are sold at $40 to $50 in the USA. Medical stores have run out of these products. Private businesses are not ready to sell these masks, now in short supply, at a standard price for the use of medical doctors in public hospitals who are working for the welfare of the public. For verification you may visit websites like: (https://abcnews.go.com/Business/americans-hoarding-hand-sanitizer-face-masks-amid-coronavirus/story?id=69385946).

Imagine the level of selfishness and cruelty in an educated society; what about the countries of the third world like India, Pakistan, and Bangladesh, where human life is very cheap. It is noticed in India that many selfish and greedy shopkeepers are selling necessary goods at a higher price. Yesterday at the Delhi Noida border, some private bus officials were demanding an exorbitant price for transporting the public from Delhi to Aligarh, Murabad and Rampur, which are not more than 100 kilometres away.

EXPLOITATION  IS  PROHIBITED  IN  ISLAM

The practices of hoarding and price-gouging are a type of exploitation of our fellow human beings when they are in dire need of a product, or when they are willling to pay at any cost. Islam does not allow hoarding for later sale at any cost in the market. Islam has laid out some principles to regularise a market and to safeguard the rights and interests of people. Hoarding and related practices are prohibited in Islam. There are several hadiths related to hoarding and profit maximisation as recorded in the various books of hadith. Most of the hadith books have a particular chapter on business practices in Islam. These chapters are based on the tradition of Prophet Muhammad (ﷺ) in Madinah.

Prophet Muhammad (ﷺ) in a saḥîḥ ḥadith addressed the sin of hoarding:

Many Scholars of Hadith, including Imam Al-Nawawi have translated the word “khâṭî’”  as referring to a sinner and one disobedient to Allah (swt). The Holy Quran has used this word to condemn tyrants and brutal persons who had killed thousands of people and imprisoned their subjects.  In the ayah below, khâṭî’ indicates that the intensity of the wrongdoing is high. Similarly,  the Quran has used the word “khâṭî‘” for Pharoah’s minions, the same word it has used to indicate the seriousness of being a hoarder.

Then the people of Pharoah picked him up (from the sea): (It was intended) that (Moses) should be to them an adversary and a cause of sorrow; for Pharoah and Hâmân and (all) their hosts were men of sin (khâṭi’în).  [Sûrah Al-Qaṣaṣ, 28:8]

There is significance to the explicit prohibition of any act in Islam. Islam wants to establish peace, harmony and equity in markets and in society generally. Accordingly, Islam prohibits hoarding, which creates dearth, fear, price hikes; and hoarding deprives some people of buying some essential goods. God has created this universe for human beings and the human being is created for the worship of God.

Some people have argued that hoarding is lawful when it comes to food grains; they  give the example of Prophet Yusuf(RA) . However, taking such inferences from this incident is wrong in terms of present day hoarding and price-gouging. Prophet Yusuf(RA)  had stored the food grain in an open and responsible way for the public good, for combating against the coming drought in Egypt: Yusuf officially managed the nationwide supply of grain in order to be able to distribute it equitably to the nation over the span of seven difficult years (Sûrah Yûsuf, 12:47-48);  he did not hoard it for the profit of himself or a select group. He was the Prophet, and he was informed well before the famine incident began, in order to prepare  for disaster management. The Quran called him trustworthy, knowledgeable and experienced. He was given the authority of minister to the king  [Pharoah] (12:54-56) in order to control and mitigate the impact of the calamitous drought in Egypt.

It is not lawful to hoard goods. There are some exceptions to the prohibition of storing up needed goods. Certain “hoarding” is allowed in Islam. For instance, keeping some goods in cold storage is not hoarding. These goods are kept for their preservation and sellers supply goods to the market for sale throughout the year, even though they might be produced in restricted time periods.

Some people get confused and have various opinions on ‘hoarding.’ They believe that some sort of hoarding is permitted in Islam. What is the essence of hoarding?

The hoarding of essential items like wheat, barley, rice, oil, sanitiser, masks and medicine, etc during periods of shortages with the intention of selling them at higher rates to people who are compelled to purchase them is haram and a Great Sin. This harmful practice is promised Hell-fire.

There are various hadiths which prohibit the hoarding of goods and public resources. Some of the hadiths are these:

Prophet Muhammad (ﷺ) said that he heard angel Jibril say that there was a valley in Hell and fierce fire blazed in it. When he asked the caretaker of Hell about those who would be put there, he said that it was for three groups: The hoarders, the drunkards, and those who earned a commission on unlawful deals.  (Mustadrak al-Wasa’il Vol. 2 page 314)

The Prophet (ﷺ) said that whoever hoards food (and keeps it from) the Muslims, Allah will afflict him with leprosy and poverty. (Sunan Ibn Majah, Hadith #  2155)

The Prophet (ﷺ) said that If anyone withholds grain for forty days out of the desire for a high price, Allah will renounce him.” (Ahmad & al-Hakim, Hadith # 4880)

WHEN  ‘HOARDING’  IS  NOT  HOARDING

Prohibited hoarding is different from legitimate storage,  which is permitted under three circumstances: A merchant can collect and store  essential commodities during the time when people do not need those items; or when it is possible for people to fulfill their needs on their own, when their need arises. Furthermore, goods are legitimately stored  to fulfill the future needs of one’s own family under normal conditions for avoiding many trips to the market—but not with the intention of selling it at a higher price.

The Prophet (ﷺ) has described the characteristic of a hoarder.

The Prophet (ﷺ) said that the [trader] who hoards goods is evil: If prices fall, he is grieved and if prices rise, he is happy. (Al Mu’jam Al Kabir Tabarani, Hadith # 186)

By contrast, a righteous trader keeps patience at his loss and gives thanks to God Almighty at his profit. The Prophet (ﷺ) has given glad tidings to such traders and promised them Paradise, as well as company with the prophets and the martyred. (Sunan Al-Tirmidhi, Hadith # 1209)

BEWARE  THE  POSSIBILITY  OF  PRICE  MANIPULATION

One practice related to price manipulation noticed in Madinah and prohibited by the Prophet (ﷺ) was a townsman’s selling on behalf of a man from the desert. Some scholars of hadith have explained the situation in the following manner:

“A stranger would bring some goods to be sold in town at the current market price. A townsman would approach him, saying, “Leave them with me for a while. I will sell them for you when the price is better.”  (Bukhari #2161, 2163; Muslim # 3824)

This kind of practice was prevalent in Arabia when Islam arrived. Prophet Muhammad (ﷺ) has prohibited the sale by a resident on behalf of a desert-dweller even though he might be a blood brother.

Prophet Muhammad (ﷺ) has warned that a resident (of the town) must not sell for a man from the desert. If [such] people are left alone, Allah will give them provision from one another (Muslim, 3826).

Islam does not prohibit any trade except those types which involve injustice, cheating, making exorbitant profits, or the promotion of something which is haram.

What Islam advocates for, is a laissez-faire market system with a little governmental intervention to control corruption and injustice.

Prof Irfan Shahid is an India-based shari'ah scholar and economist. He has graduated from Lough borough University, UK. His area of studies includes Economics, Banking, Stock Markets, Islamic Finance, and Islamic Studies. He has authored several books and research papers on Economics, Islamic Finance and the Stock Market. Prof Shahid has worked as an assistant professor at Mazoon University College, the Missouri Institute of Science and Technology, USA, and various universities in India, the Middle East, and the UK. He has also worked for the Islamic Development Bank, Jeddah. For further details, please refer his website: www.irfanshahid.net

Advice and Guidelines for those Performing Hajj