Neurocardiology and the Spiritual Heart Part 1 of 2

The heart and its centrality to health was in the midst of confusion for centuries, until William Harvey (1578-1657) in the seventeenth century clearly defined its role. However, in the medieval period, the Islamic Holy Book, the Qur’an, defined the spiritual aspect of the heart (Qalb), and the Traditions of the Holy Prophet (ﷺ) highlighted the anatomical and functional aspects of the heart in the early seventh century. This Qur’anic knowledge, however, remained unknown outside the sphere of Islam, and continued to be ignored by the scientific community.

Here, we briefly review the history of the ancient philosophical concept of the circulalatory system and compare it to modern day scientific knowledge.  We address the connection of the brain (the cerebral cortex or cranial brain) to the heart and identify the existence of a cardiac intrisic neurological system that impacts the cranial brain.  Finally, we attempt to identify the spiritual qualities of the human heart and its impact on human behavior.

The discovery of the cardiovascular system occupies a very significant part of medical history.  In Europian Medicine, starting with Hippocrates (460-370 BC), history has recorded the difficulties of discovery tainted with misunderstanding and wrongful applications.  For almost 1,300 years Europian medicine was in the grip of the theory of second century philosopher and physician Caudius Galen (born 129 CE), prevailing until the seventeenth century.  The first clear definition of the circulatory system was established by William Harvey, in his book De Motu Cordis in 1628.

While Europe remained an ardent adherent of Galen’s teaching, there came a revolutionary light of Divine Knowledge in the seventh century that kindled the heart of Muhammad (ﷺ) and that of the believers through the revelation of the Holy Qur’an.

In the Holy Qur’an, the word ‘Qalb’ (pl. qulûb) refering to the heart, is mentioned 132 times, and its synonym Fu’ad (pl. af’ida‘) is mentioned a few other times.  It also mentions the location of the Qalb as located in the chest (Ṣadr; pl. ṣudûr).

In these verses, the Holy Qur’an focused primarily on the spiritual aspects of the heart and emphasized that belief in the Qur’an and its practices are the remedies for diseases like disbelief, hypocrasy, and treachery :

The Holy Prophet (ﷺ) emphasized the importance of prevention of diseases over treatment, in a Hadith referred to with the designation “Five before five.”  He said:

“[Take] from life before death, from health before illness, from youth before old age, from wealth before poverty, and from leisure before work.”

Nevertheless, the blessed Prophet (ﷺ) treated people with simple herbal medicine (Ayurvedic Medicine, the source of scientific medicine) and asked people to seek medical advice. In a well-known Hadith he related the wellbeing of the body to that of the heart:

After the demise of the Prophet (ﷺ), Islamic Medicine flourished for centuries in the medieval period, because of the invaluable contributions of physicians like Hunayn Ibn Ishaq, Al-Razi, and Ibn Sina, among others.

But, in relation to the circulatory system, it was Ibn Al-Lubudi (1210-1267 CE) who made the amazing discovery that as an organ, the heart is the first organ to develop in the body.  This remarkable discovery was followed by the research of Ibn Al-Nafis (1213-1288 CE). He defined the general circulation, coronary circulation and pulmonary circulation, and published his findings in his book Al-Shamil fi al-Ṭibb (The Comprehensive Book on Medicine) in 1242 CE.  But this valuable knowledge remained ignored by the Europian body of physicians, until the time of William Harvey in the seventeenth century.

The Heart, Lungs and their Physiological Functions

The heart and lungs are at the center of health and life. They are lodged and protected in the chest, called ‘Ṣadr’ in Arabic. They work as one unit to sustain life.

The bellowing effect of the thoracic cage helps in creating a negative pressure inside the chest and this assists the venous blood to return to the right side of the heart. Blood circulates through the lungs, picks up oxygen and returns to the left side of the heart; the heart ejects the oxygenated blood into the aorta for circulation. It also generates sufficient forward pressure so that the blood can reach the remotest part of the body. Once the blood has delivered its oxygen to the tissues, the blood receives the carbon dioxide from the cells and brings it back to the lungs to be exhaled into the air.

Besides working as a mechanical pump, the heart has other non-mechanical functions: It secretes the atrial natriuretic hormone, the atrial peptide, epinephrine, norepinephrine and dopamine, necessary for maintaining an internal homeostasis of fluid and electrolyte balance.  The heart also acts like a peripheral brain sending impulses to the cranial brain to keep it abreast of the physical condition of the heart—and, as we shall see, even its spiritual condition. The endocrine functions of the heart also include the secretion of Oxytocin, the hormone necessary for birthing and breastfeeding.

In addition, the electrical activity of the heart generates an electromagnetic (EM) field around the body for cognition.  Research shows that the magnitude of the earth’s electromagnetic field changes according to the EM changes in the earth’s environment, which in turn is related to human emotion, signifying human connectivity. [ii]

The Physiological Structure of the Heart

The heart has four chambers: two atriums and two ventricles; the right side receives the venous blood from tissues and the left side receives the oxygenated blood from the lungs.  The heart works as a mechanical pump: with contraction it empties the blood and with relaxation it fills.  The heart muscle is electrically stimulated to contract, while relaxation is a passive process.  This process of phasic contraction and relaxation earned the heart its Arabic label of ‘Qalb’, “one that returns in cycles.”

The conducting system is composed of specialized muscle cells, which are capable of generating an electrical impulse at different rates—the SA node being the fastest (generally 72 times/minute, in adults). Being faster in rate, it sets the pace of rhythmicity for the rest of the heart.

The impulse generated by the SA node travels to the last of the cardiac muscle cells in 0.40 seconds and depolarizes the entire heart, leading to contraction. It corresponds to systole.  Repolarization is a passive process that corresponds to diastole.  This electrical impulse spreads outside the heart into the rest of the body and creates an electromagnetic field in its surrounding area. An electrocardiogram detects the intensity of the electrical impulse and its direction of spread.

The Physiological Mechanisms for Regulation of the Heart

The efferent pathways (from the brain to the heart) start with the Nucleus of Tractus Solitarius (NTS) in the medulla oblongata. The NTS, besides being semi-autonomous, receives impulses from the cerebral cortex and the subcortical center like the thalamus, hypothalamus and amygdala. An impulse from the NTS travels along the vagus nerve and the sympathetic chain to the heart and integrates with the intrinsic cardiac neuron to stimulate the sinus node (the pacemaker) that generates the electrical impulse to stimulate the heart muscle.

The afferent pathways (from the heart) start in the cardiac ganglia, travel up the vagus nerve and sympathetic chain (via the thoracic sympathetic ganglia and the spinal cord) and reach the NTS in the medulla oblongata.

Some fibers from the heart ascend directly, some indirectly (through NTS), to the subcortical center like the thalamus, hypothalamus and amygdala, and finally to the cerebral cortex to convey pain and body perceptions, sensations of hunger, appetites and emotions, which can affect the heart rate: 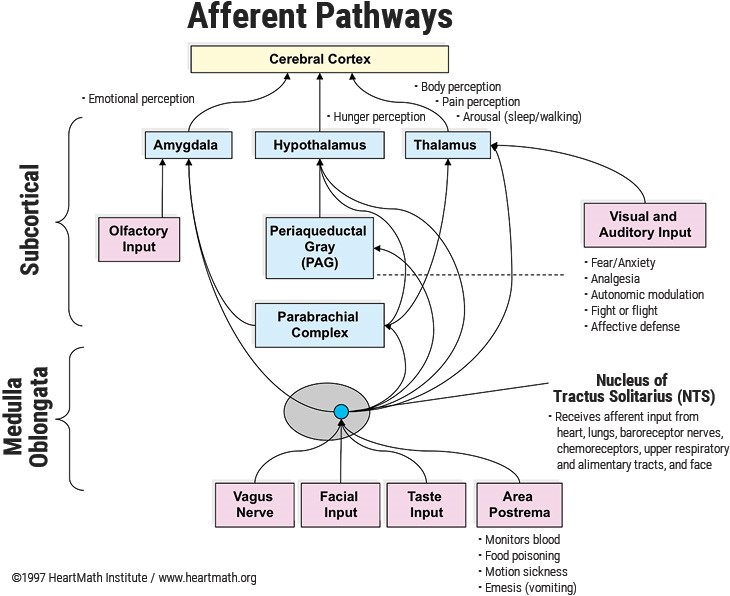 Afferent pathways by which information from the heart and cardiovascular system modulate brain activity. Note the direct connections from the NTS to the amygdala, hypothalamus and thalamus.

In addition, visual and auditory impulses (for fear, anxiety, fight/flight) directly reach the thalamus via the geniculate bodies, bypassing the lower cortical processing in NTS.  Some of these secondary impulses from the thalamus then directly descend downward to the NTS (shorter route) for immediate action as in “Fight or Flight,” and others ascend upward to the cortex for decisive action.

Several hormones released from the heart, which together with baroreceptor impulses from the aortic and carotid sinuses, stimulate the NTS to regulate blood pressure.

The Dual Control of the Heart and the Integration of Response 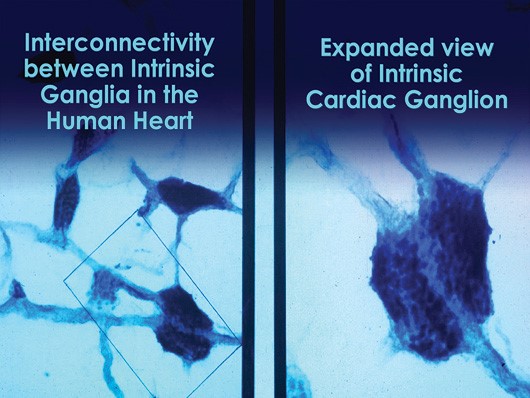 The vital function of the heart is guaranteed by a unique set of two complementary nervous systems: the cranial brain (through the autonomic nervous system) and the intrinsic cardiac neuronal circuit. The heart’s intrinsic network is enriched with complex ganglia, a neurotransmitter, protein and support cells, the same as those in the brain. [iii]

When the central control fails, the local control will prevail, and the heart will continue to function. This is seen in a state of deep sleep and central unconsciousness.

The descending signals from the brain are integrated into the heart’s intrinsic nervous system along with signals arising from the sensory neurons in the heart which are stimulated by intramural pressure, heart rate, rhythm and local hormones. The final outcome is the integrated response between the descending signals and the response of the intrinsic system to the above stimuli. Once information has been processed by the heart’s intrinsic nervous system, the appropriate signals are sent to the sinoatrial node to generate impulses for the heartbeat.

Contrary to the general understanding, recent findings show that the majority of the fibres in the vagus nerves are afferent (ascending, from peripheral organs to the brain) in nature; furthermore, more of these afferent fibres are related to the heart than  to the other organs supplied by these nerves. Thus, the message from the heart travels to the brain via ascending pathways in both the spinal column and the vagus nerves, to different levels at the medulla, hypothalamus, thalamus, amygdala, and then to the cerebral cortex.

The Heart and its Audio-Visual-Tactile Capability

From a neuroscientific point of view, the heart works like a brain, having all the capabilities to receive information, and to process, store and/or deliver it.  The intrinsic system, in addition to regulatory function, receives audio-visual and tactile impulses via the thalamus and the NTS to keep the heart in touch with the environment we live in. Indeed, it is part and parcel of our state of consciousness:

Once impulses are received, the heart instantly interprets them and directs the cranial brain to express its emotional response for any emergency, as in the fight or flight response, emotional tears, or a happy face.  Cardiac ganglia are capable of storing short term memory, which then is transferred to the hypocampus for storage and to the frontal cortex for planning.

Our scientific and medical knowledge of the awesome complexity of the biological heart is increasingly sophisticated, but what do we know about our even more awesome spiritual hearts?  In Part 2 we follow up with what the Quran reveals to us about the spiritual functions connected with the physiological heart.

[ii]   (How the Human Heart Can and Does Affect The Earth’s Electromagnetic Field, www.heartmath.org/gci; https://www.youtube.com/watch?v=mn5jiUpLT-M)

Are You a Complete Muslim? | Part 4

Are You a Complete Muslim? | Part 3

Are You a Complete Muslim? | Part 2

Are You a Complete Muslim? | Part 1

Ṣalah: The Deep Reach of Islamic Prayer Part 3 of 3