Does Jihad Fulfill our Purpose? | Part 1 of 2

“…when your Lord said to the angels, ‘I shall place upon the earth a viceregent [khalifa] …

…and when He said to the angels, ‘Prostrate before Adam!’…

How does man fulfill his own purpose as earth’s vicegerent, given him by Allah?

“[We said to him], ‘O David.  Surely We have made you Our representative [khalifa] upon the earth, so judge between the people with justice, and do not follow [your own] desire,  as it will cause you to stray from the Way of Allah… “  [Sûrah Ṣâd, 38:26]

In this context, what is Jihad for Muslims today? Jihad is an Arabic word that means ‘struggle, resisting, or striving’; it does not mean “fight” or “war.” The Arabic word for fight is Qitâl and for war is Ḥarb.  Of course, you need to struggle, strive and resist your desires to live your life for a purpose. But how many have found it is very easy to waste their life in games and staying late night in bars drinking beer, watching sports, not working —and to depend on others to provide for you.

There are two different types of jihad. The first type of jihad is the greater jihad which is an inner spiritual struggle.  Prophet Muhammad (ﷺ) explained this type of jihad when he told his companions after a war:

On the authority of Jabir:

“We came from the lesser jihad to the greater jihad.” They asked him: “What is the greater jihad?” He said: “The struggle against oneself.” (Kitab Al-Zuhd of Al-Bayhâqî – graded Da’îf / Weak in chain of transmission; mentioned also by Al-CIrâqî, Al-Ghazâlî, and by Al-Suyûṭî on the authority of Ibn Hajar)

The greater jihad is to learn patience and self-control, and is to manage your desires, emotions, and conflicts, instead of letting your desires lead you, as if an animal. By this type of jihad, you can clean your inner soul and transfer it from the soul that is prone to evil to become a reassured soul.

The first time you smoked a cigarette, your body was clean and pure —so it did not like smoking and resisted it by coughing. But you forced it to accept this unnatural invasion of your lungs to prove that you were not a child. Step by step, your body accepted smoking and later you became addicted; so even if you would change your mind later and want to quit, your body would not just refuse. Rather, it would persist in ‘wanting’ to smoke.  Why? Because you spoiled it. That is how the sin affects your spirit, soul and body. It is normal to commit a sin, but it is not normal to continue in it. You need to clean yourself by repentance after every time you commit a sin. It is exactly like washing a pan after every time you cook in, to remove the black layer. Try to imagine if you never washed this pan but continued to cook in it. Do not wait until the impacts of the sins accumulate on your heart as heavy layers and block its normal function.

If you take a wrong train, try to exit at the first station; because the longer the distance you continue, the more expensive the return. It is the same thing if you take the train of sin. Although God is Forgiving and Merciful, it will be more difficult for you to quit a sin that you are addicted to.

Actually, all the Islamic acts of worship are just exercises in patience to achieve your purpose, empower you and prepare you to play your role as a successive authority / viceregent (khalifa) of God. For example, we resist our laziness when we pray, and we fight our selfishness and greed when we give in Charity. In addition, Fasting is a very good tool that can help you in your inner spiritual struggle. We resist our desire for food and drink, we tolerate hunger and thirst and wait patiently until the time God made for us to eat. Prophet Muhammad considered the act of worship as Jihad because all the acts of worship need a struggle to be performed properly.

[That she said], “O God’s Messenger ﷺ  ! We consider Jihad as the best deed. Should we [women] not fight in Allah’s Cause?” He said, “The best Jihad is Hajj-Mabrur [i.e. Hajj which is done according to the Prophet’s tradition and is accepted by Allah]. (Saḥîḥ Al-Bukhârî 2784)

Non-violent jihad, in our modern terms, is the diplomatic way to solve problems. Prophet Muhammad referred to it:

It was narrated from Tariq bin Shihab that:

A man asked the Prophet, when he had put his foot in the stirrup: “Which kind of Jihad is best?'” He said: “a word of truth spoken before an unjust ruler.”  (Sunan Al-Nasâ’i 4209 – Graded Ḥasan [Darussalam])

Islam does not accept oppression, aggression or persecution. It does not support dictatorship, and it requires Muslims to have a duty of holding the ruler to account. It is a sin when you wrong yourself and accept living under oppression without any quality of life without rights. So if you are weak and cannot fight for your life, the Quran encourages you to move to another land where you can have the kind of life that God honors and meant for you to have as a human being.

When we study the Prophet Muhammad’s life, we learn how to deal with aggression as Muslims. The Meccans denied Prophet Muhammad (ﷺ), mocked him and called him a sorcerer, a poet, insane, etc. They hit him until he was bleeding. They killed his Companions and tried to kill him. They forced him to leave his homeland, and they fought against him through psychological and physical wars, just to prevent him from practicing his religion. So what was his reaction? Actually, his reactions were gradual:

Violent jihad is the military fight in a war that is declared and conducted by a government, not by individuals. That is why Prophet Muhammad (ﷺ) did not fight the Meccans back, until he had first moved to Medina and built his Islamic constitutional government.

We can look at these three different types of Jihad as three gradual stages, as Table 2 portrays. Only gradually can jihad  become possible, because you need to succeed in fighting against yourself first before you think to fight against the oppression or aggression of others; you cannot beat your enemy before beating the rough edges of yourself first. 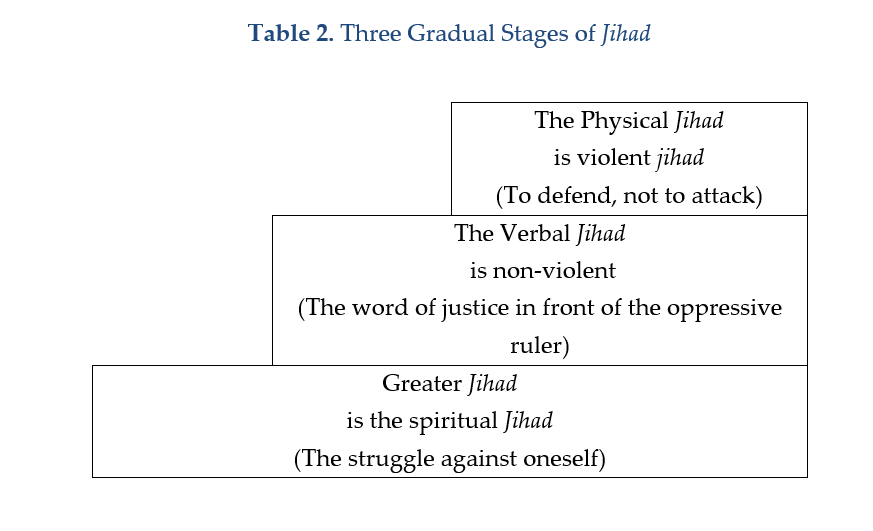 To be continued in Part 2…

Ayman Refaat hails from Alexandria, Egypt and now resides in the United States of America, where he teaches as Adjunct Instructor of Arabic Language at the University of Missouri-Kansas City. He also serves as Islamic Spiritual Guide at the U.S. Penitentiary in Leavenworth. Mr. Refaat holds several university degrees: Bachelors (1994) in Arabic Language and Literature, as well as in Oriental Language and Literature, from the University of Alexandria; Masters (2015) in Curriculum and Instruction, from the University of Missouri-Kansas City. Among his publications in Arabic are several articles regarding Arabic and Hebrew Literature; also two books on Arabic grammar and rhetoric. English language publications include a set of three primary level books for learning Arabic starting with the alphabet. Forthcoming works: Liberate Islam: A Modern Rational View of Islam in its Original Sources; The Bell Curve of Civilizations - with focus on Islamic Civilization; The Purpose of Life in Islamic Spirituality. Also, he has given presentations on the theme of his book, The Bell Curve of Civilizations, at several churches in his area. Mr. Refaat is available for small group talks on Islamic subjects and may be contacted at [email protected]

A Tale of Two Women: The Milkmaid and the Empress | Zainab bint Younus